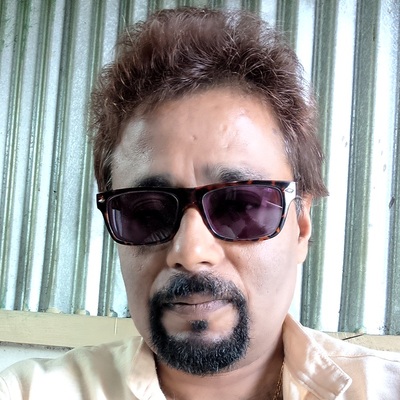 Tamal Sen Sharma was born in a traditional Bengali family at Alipurduar Jn, District-Jalpaiguri, West Bengal, India. His talent to paint was inborn and was honed by years of work. His schooling started from Railway Higher Secondary School of Alipurduar Junction and he completed his higher secondary education from Mc.William Higher Secondary School at Alipurduar. After that he graduated from the Alipurduar College. After that he completed PGDCA. He took a bold decision in his life to become an artist and to take up painting. His inborn talent soon started reflecting on his canvas. He was highly prolific during this period- the number of painting grew up to an amazing and divers collection of nearly 12,000 paintings of various sizes. In the meantime, he received Silver Medal(2nd position) in painting in the 5th year on an All India basis from B.S.P(WB/India). Next, he was awarded the Bronze medal(3rd position)in painting in the 7th year. After that, he started his own institution called “Bharatiya kala Bhawan” to teach art and painting. At present, his works are being displayed in different renowned Art Galleries at leading art centers. He began to join different painting camps and workshops at various places. His works are being published in different leading newspapers and magazines. Mr.Tamal Sen Sharma works on lots of medium, like pastel, water colour, oil colour, acrylic, charcoal, pencil shade, metalic etc. Landscapes forms a major portion of his work. The despondency of the famished and the downtrodden sections of society finds faithful potrayal in his canvas-his effort to empathise with thier pain and suffering. Tweenty years of tireless work, research (in abstract painting, modern art, fine art, and visual art) fortitude devotion, patience, and intellectual appplication took him one step forward in his artistic journey. It gave birth to a completely ingenious and unique style of painting. This style, of his, was highly appreciated by art lovers of India and rest of the World. Black and White are his favourite colours. He loves to spend his leisure time amongst nature in the company or birds and animals. Mountains, rivers, forests, and verdancy entrances him. At home, he loves tending to his flower garden when free. He likes to lead a simple, altruistic and courageous life inspired by the ideals Of Netaji Subhas Chandra Bose and Swami Vivekananda. His desires is to be of assistance to orphanes and to helpless, neglected and deprived sections of the society with his painting. A major portion from the sale of his paintings is to fuel his philanthropic work. He also craves for sustainable ecological development……the maintenance and preservation of animal and plant life. Special Correspondent _____________________ Date: 1, January, 2009

Academy of Fine art. (Calcutta.)
Ramkinkar art gallery and so on.